Would you believe?! Hillside is 140 years old! 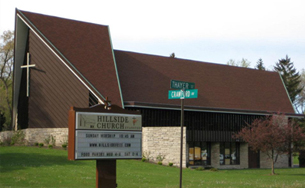 Here is Our Story written by our church administrator and historian, Faith Albano.

A group of traveling evangelists, Rev. W. Kelsey and two others, started a tent meeting on the corner of Lyons and Ridge in Evanston around 1879. Their effort to establish a permanent church took root and became a reality when Jacob Franz, Edward Foster, Frank and Anna Kline, and J. W. Beebe became interested and joined the group. Mrs. Eliza Pratt, a convert of the tent meeting, gave $1,000 and the lot on which the tent stood. In less than a year from that time of the tent meeting the new church was occupied by 54 members. Two years later, Mrs. Pratt donated additional land so a parsonage could be built adjacent to the church. 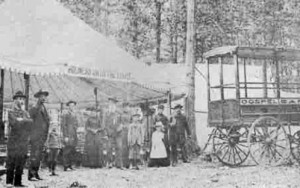 The church building was the home of the First Free Methodist Church until 1922 when they purchased the Delano Chapel from the Baptist Church, which resided on the southwest corner of Maple Avenue and Simpson Street, and moved into that building in October of that year. In 1954 John Bell gave the church $1,000 toward the building of a new church. Shortly thereafter a three acre site was purchased on Crawford Avenue adjacent to the Hillside Village and it was voted to rename the proposed building Hillside Free Methodist Church. The church moved to its present home in March of 1961. In January of 1964, the city of Evanston purchased the second church and parsonage as well as three adjacent lots for the purposes of making a neighborhood park. The new park, Fireman’s Park, is there to this day. 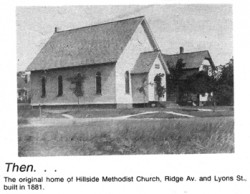 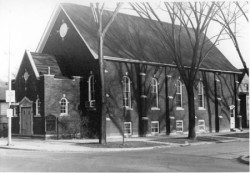 From the very beginning the people of this church have shown a deep, strong, abiding love of the Lord and sought to do His will in all things; preached the truth of Jesus Christ as Lord and Savior and did not compromise that truth or the Word of God; and has had a heart for missions, ministry, service, and reaching out to lost souls. Though we have had our share of ups and downs, struggled in some areas of ministry more than others, and at times throughout our history financial difficulties have been a like a plague, we continue to “press on toward the goal.” With great joy and anticipation, we look forward to what the Lord has planned for us in the years to come. We continue to seek to do His will in all things, bring Glory and Honor to His name, reach out the poor and needy, and most of all, bring the gospel message to a lost and broken world.